Our meeting was held at Patagonia on the Surfcoast Highway, Torquay.  Cara, the store manager from Patagonia, said staff are keen to assist SANE with their efforts in conservation activities. This included things like working bees and membership promotion.. After discussing the idea over the last couple of weeks it was decided that rather than expand our terrestrial works program, it might be valuable to explore a ‘marine’ subgroup in SANE. Consequently it was decided to invite Andrew Gray, the Coast Care co-ordinator for this region to present at the SANE committee meeting. The following Minutes are a record of that meeting:

Warming Oceans Encourage Explosion of Dangerous Bacteria
BRUSSELS, Belgium, September 13, 2011 (ENS) - Climate change is warming ocean waters, causing the spread of bacteria predicted to cost millions in health care as people are exposed to contaminated food and water and to marine diseases at work or at play.

The warning is expressed in a paper released today by European scientists in advance of a two-day conference in Brussels on the effects of climate change on the marine environment.

Project CLAMER, which stands for Climate Change and European Marine Ecosystem Research, a collaboration of 17 European marine institutes, issued the 200-page synthesis of more than 100 EU-funded projects published since 1998, together with a public opinion survey, a new book based on the scientific findings, and a major new documentary film to be featured at CLAMER's meeting September 14-15 in Brussels. 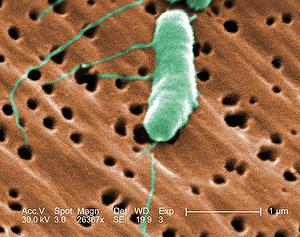 Hi everyone,
Just thought you might like to see the results of the working bee this Sunday. 150 x Coast Pomaderris (Pomaderris paniculosa ssp. Paralia) were put in on the Rincon Headland with S.I.S. crack timing and precision as the team valiantly fought off an unhappy ant colony.

Plants will be watered in this week by the weather and brush-matting is being organised to go in over the top of the planting in the next couple of weeks. 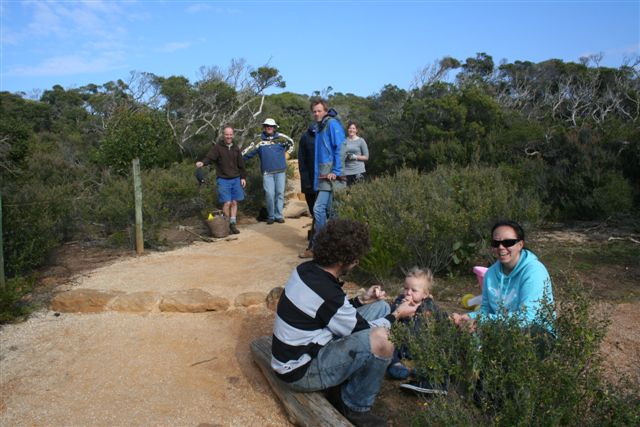 The area was previously very degraded and full of environmental weeds. Over the last few years the woody weeds have been removed and an initial planting took place in September of 2010. The site is about 1 hectare in size. The idea is to link up the Ironbark forest in the gully with the Moonah woodland on the headland. There are now thousands of plants in the ground and SANE members have spent the last few working bees getting the grassy weeds under control. As of Sunday we have moved almost two thirds of the way through the site with many of the plants now easily visible as one moves through it.

Thanks to Kev, Gordon and Charles for all their good efforts. Unfortunately no sight of the Queen. 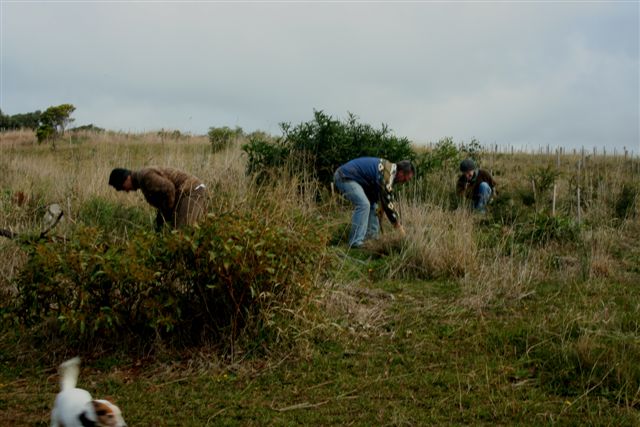 Did you know that a recent award winning film called 'End of the Line' predicts there will be no commercial species of fish left in the oceans by 2048 as a result of over-fishing. The movie highlights the plight of marine species the world over. Australian fisheries, whilst not as bad as those in the northern hemisphere, are still in bad shape. You can do something about it. Community groups from around the Surf Coast are aligning with Conservation Enterprises Unlimited (and using the ACF's seafood assessment) to turn this situation around. We want to make the SurfCoast the Sustainable Seafood Coast. 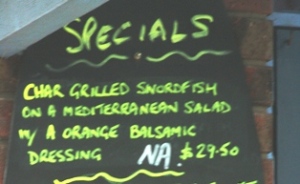 Signs such as the one shown above, which was taken from a Torquay Restaurant will then become a thing of the past-quickly! We need your help to create the change. Whenever any of you are planning to eat out at a cafe, restaurant or are purchasing seafood from a fish monger. Can you ask the following two questions- regardless of whether you intend to eat seafood:

NZ's new coastal policy (update) which includes provisions to protect some 30 of the country's best surf breaks through planning provisions.

Last working bee for 2010 coming up.  we will be working up at Southside in the carpark area where we will remove a number of woody weeds growing in amongst our revege sites (near the stockpiles of mulch near the Bells/Southside track.

Hi everyone,
Just to let you know that there is a SANE working bee on Sunday 14th November starting at 10:00am and finishing 12:30pm. We will be meeting opposite the Winki Pop carpark. If the soil is still good we will be planting Prickly Teatree (Leptospermum continentale) in the last fenced area near the Winki entrance as well as moving through all our plantation sites to remove remaining Melaleuca armillaris and co. I keep saying we are nearly done with clearing them from the area but they keep coming back; fortunately in less numbers.

Also, on another note, you might be interested to know that Jan Juc Coast Action had a working bee last Sunday and whilst we were all onsite Trevor Prescott (Native Fauna expert of many years experience) bought a native Swamp Rat which was collected from the Jan Juc clifftop to the working bee to show us all. Importantly, Swamp Rats require sedgy/grassy vegetation of some height for shelter and food which is not available if an area is mown short. It's just another example of community tweeking management of a site to make it more friendly to all the other native life forms that we share this land with!! Needless to say, Swamp Rats are a big deal within the Bells Beach Reserve.

(Swamp Rat) Little fellow just as happy as can be at my place!!